Rabbits don’t communicate like other animals. They have complex personalities  and can be easily misunderstood. So this is a quick and simple guide to understanding your beloved pet and allowing him/her to tell you how they feel.

Binky – This is done by a rabbit that’s happy. They jump and twist their body in mid air, often in different directions. Sometimes instead of a full blown binky rabbits can do a quick head flick. When you first see a binky you will be amazed at the agility of these beautiful animals!

Thumping – rabbits will thump to say they are frightened, angry or if there is danger.

Dead bunny flop – when rabbits are relaxed they will lie down stretched out on the floor. However a dead bunny flop goes a step further. The rabbit will roll on its back, feet and ears in the air, often scaring the owner making them think the bunny has died! As you can see below it’s quite a sight.

Periscope (up on hind legs) - rabbits are extremely nosey! They will do this to look at what’s going on around them.

Head and ears forward – they are looking at something new and want to investigate.

Grunting – rabbits do this to warn you off if they are angry or scared. It can be followed by a bite so if they are cross, be careful and take things slowly. Often the rabbit will also have its ears straight back against its head before attacking.

Tooth purring – your bunny is happy and content. It often happens when

Circling – this is a hormonal sign but can also be caused by other excitement. Often because of food being given or prepared.

Honking- a hormonal noise usually made by un-neutered males.

Chinning - Rabbits have scent glands in their chin, so when they rub the chin on objects in their domain or even on you, they are marking what they see as their territory.

Spraying – spraying is another way of marking territory; however this can often be stopped by neutering or spaying. Both male and females can spray.

Humping – This can be brought on by hormones and happens when the rabbit hits maturity and wants to breed. However even neutered rabbits will still hump other rabbits. This is because they are competing for dominance. The dominant rabbit in a pair or group will hump the others to assert his or her place in the group. Both males and females do this.

Pulling out fur/collecting hay in mouth- usually done by females that aren’t spayed. They are preparing a nest for babies and will likely give birth soon, perhaps over the next few hours or days. Rabbits can also have phantom pregnancies which is why it is best to have your female bunny spayed to reduce unnecessary stress.

Loud tooth grinding/hunched bunny- this loud grinding is very different form purring. It is a sign of pain and/or discomfort. Along with your rabbit being hunched up and not willing to move, you should seek urgent medical care from a rabbit savvy vet.

The dreaded rabbit Scream - this is a rare sound but means your rabbit is either extremely scared or in pain. Take your rabbit to a vet if this happens as it needs looking into urgently!

Further Reading - quite possibly one of the best sites around, dedicated to getting to know your rabbit:

The Language of Lagomorphs 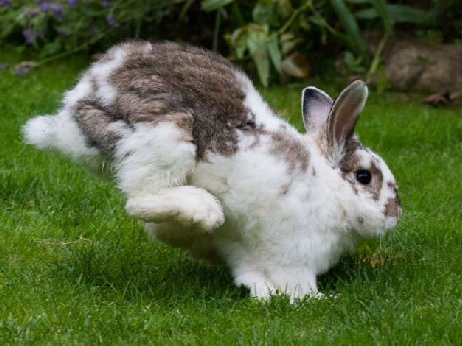 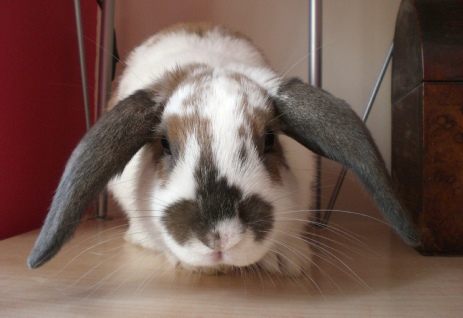