It is, with very few exceptions, vitally important that your rabbits are spayed/castrated regardless of sex and companionship.

There are sometimes contraindications to doing so and in the main this will be because of the overall poor health of a rabbit that would possibly be at great risk under anesthetic BUT this is the exception and all healthy, mature rabbits should be neutered.

Rabbits are social animals and should be given a life with a friend or friends. These friends should be rabbits not any other species. The best combination often is a male and female partnership, a bit like a marriage.  Then of course it is important that there are no pregnancies producing unwanted offspring (kittens or kits) so neutering will prevent this.

If you are keeping a mixed sex pair and the male isn't neutered but the female is, the male will simply make the life of the lady bun miserable in most cases by continually pestering her and eventually this may end up with fighting or a very depressed and frightened female.  If you neuter the male and not the female, the female in most cases will still display hormonal behaviour and 'protect' her territory as a mother rabbit would. Her accommodation could be 'her nest' regardless of pregnancy and she may well become defensive, aggressive, nippy, vocal and agitated.  If the male mounts her (non sexual but dominance related) she can then be brought 'into season' and become even more hormonal.  Female rabbits do not have seasons but are made hormonally heightened when mounted and ready to be impregnated.

By rescuing rather than buying, you will be able to adopt a pair of rabbits that are already neutered with a firm relationship which rules out the need  to worry.  Pet stores that recommend pairs are heading in the right direction with their advice but often don't tell you about the need to neuter.  In particular with mis-sexings at the shop if un-neutered unexpected litters commonly result.

It is widely known that an un-spayed female will almost certainly develop uterine cancers and by the age of about 3-4.  Many will not show any symptoms but may just deteriorate healthwise until its too late.  If caught in time a uterine cancer may be contained by the uterus itself and there may be no further related complications in the future, however often if left unchecked it can spread to the lungs and this will often be fatal.  Cancer in rabbits can be treated with chemotherapy but it is not widely used, is very expensive, and I imagine rarely has the desired effect.  If your female gets cancer there is no doubt she will suffer horrendously.

Male rabbits can also be susceptible to cancers (testicular) if left un-neutered, however it seems not so much is known about this.  But the operation for males is not invasive and easily carried out by a competent vet.

Both sexes will be very hormonal if they are left intact and this manifests itself in various ways. The most common thing is seeing sexual behaviour and this involves mounting.  In male rabbits even if the rabbit is living alone, it will often persistently mount and rather than a rabbit, it will be your leg or arm instead. This is not pleasant particularly if there are children in the house that will be upset or worried. The only way to stop this is to neuter.

One of the main reasons people seek advice with behavioural issues is due to rabbits that aren't neutered.  Un-neutered rabbits will be very territorial, especially where there are other rabbits or animals in the household.  But even if there aren't, an un-neutered male will often be feisty, and will almost certainly wee and poo to mark his territory.  Rabbits will also spray urine to mark and this is a very strong, unpleasant smell.  In the wild rabbits will also chew trees and plants to mark their home turf and they will do the same in the home by ruining furniture, carpets, curtains when living indoors, or will simply attempt to chew their hutch or shed if outside. (not all chewing is hormonal but can be due to boredom/lack of environmental stimulation or lack of space).

People often report problems with rabbits scratching or biting and this can sometimes be as a result of being entire, however sometimes it can be due to handling in the past.  But with most bunnies, if neutered early the poor behaviour may not become ingrained and given sufficient time and patience can be stopped from being an issue.

Being recommended same sex pairs by pet stores/breeders is not the best advice because, even if they are litter mates, they may will still begin to squabble when they start to get mature (3-6 months for males and 4-6 months for females).  Fighting can start overnight and the first you may know of it is when you see the fur fly. Even if you then neuter the damage may have been done and the relationship may end up being damaged forever.  It is not uncommon for two young un-neutered males to try and castrate each other and this can often lead to severe injury or death. 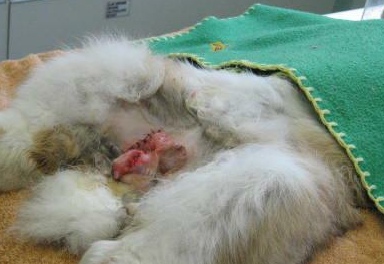 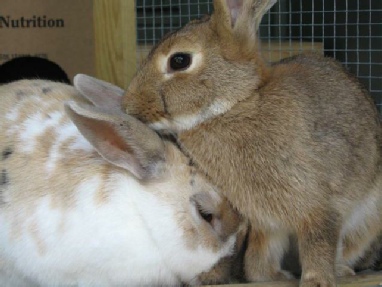 Happy bunnies are neutered and bonded

Injury caused after this rabbits brother attacked him and tried to castrate him. 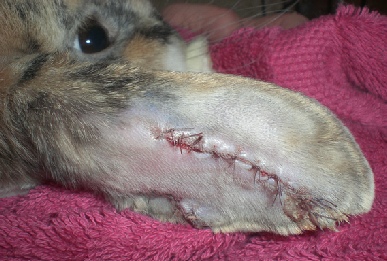 If your vet has told you this, you need to fully understand why in your case this has been said. If you rabbit has other health issues that could endanger its life due to the giving of an anesthetic, then you may have to accept that its the case.

If your rabbit is otherwise fit and well your vet should be advocating neutering for both sexes.  If they don't, then I would strongly recommend you find another vet who does. A vet that does not recommend you neuter is either lacking in rabbit veterinary knowledge, fearful of carrying out the procedure or has no experience of doing so.